Sunday night’s low scoring Super Bowl LIII game between the champion New England Patriots and the Los Angeles Rams was more of a super bore. As a result, ratings slid on both sides of the border.

In the United States, it was a more pronounced decline. CBS claims the three-and-a-half-hour telecast posted a total audience delivery of 100.7 million viewers across all platforms. That includes CBS Interactive, NFL digital properties and Verizon mobile properties as well as ESPN’s Spanish language Desportes television and digital properties.

In other words, it took streaming to boost The Super Bowl over the 100 million mark this Sunday. Final linear TV deliveries for Super Bowl LIII topped at 98.2 million viewers, scoring a 41.1 HH rating. That makes it the least-watched NFL championship since Super Bowl XLII on Fox in 2008 and the lowest-rated since Super Bowl XXXVII on ABC in 2003.

In Canada, Sunday’s game was the third (and probably final) game where the host Canadian broadcaster was forced to surrender about a third of the audience to CBS border stations in compliance with a CRTC ruling which allows Canadians to see the American Super Bowl ads. (The new free trade agreement, once ratified, will likely allow CTV to resume simultaneous substitution of signals).

While the Super Bowl broadcast was down, the NFL season games were up in the ratings both in the U.S. and Canada. The fact that the game was stalled at 3 to nothing at half time – it was Maroon 5, Patriots 3 – didn’t help. Most fans would argue that nothing could top the two playoff games played two weeks ago, both overtime thrillers.

Another factor at play here: cord cutting. Fewer people subscribe to cable or dish packages. CBS says Sunday’s game set a record for digital viewership, but that number is still dwarfed by the broadcast TV take.

The NFL also has been hit for a loss over Kapernick  and concussions, with some audience members taking a knee.

Then there’s the Patriots. Again. Enough.

Welcome to the new Brioux.TV 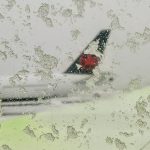