A colleague called me out on a comment I made a post or two back about CBC executive director of network programming Kirstine Layfield (left). She objected to the way I described her at CBC’s 2008 press launch Monday. I think the offending line was “kittenish programming mistress.”
Looking back the line may have been a little catty. I did not, for example, describe CBC vice president Richard Stursberg as “doggish,” or “master.” I did sorta say he should duck out of rifle range next time he takes a podium in the CBC atrium. So far, nobody has objected to me writing that.
I guess I was reacting to the way Layfield dresses up for these things. A friend in this business uses the wonderful expression “cleaving for the media.” Layfield doesn’t cleave, but she does look runway stylish at these things, how is that. She has a striking figure, and with her long, blond hair makes a strong visual impression.
The other interesting thing is, almost every programming boss in network television these days, on both sides of the border, is a woman. In Canada, Susanne Boyce has been crafting the CTV schedule for over a decade. At Global, Barb Williams and Kathy Dore are in charge.
In the U.S., CBS CEO Les Moonves handed the keys to Nina Tassler several years ago, with Nancy Tellem even further up the corporate ladder. The CW is run by Dawn Ostroff. Gail Berman called the shots at Fox before Peter Liguori and Kevin O’Reilly took over.
The point is, after dozens of press tours and upfronts and network this’s and that’s, I have never once noticed what Nina Tassler was wearing, or Gail Berman, or any other female programming executive.
So maybe I just wanted Layfield to know I appreciated the effort. Or maybe, if there had been any new shows announced Monday, I wouldn’t have been so fixated on the footwear. 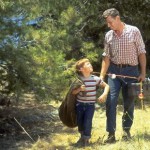 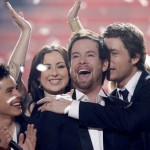 Four In A Row For American Idol