Been up to the shores of Lake Huron lately at the decidedly unplugged cottage and behind in my blogging. Here are a few recent Canadian TV headlines of note:
18 to Life: The CBC sitcom (starring Stacey Farber and Michael Seater, right) has been picked up for a summer run in the U.S. The romantic comedy starts airing Stateside Tuesday nights at 9 p.m. starting Aug. 3 on The CW. The 90210 network describes it as “a modern day Romeo and Juliet.” They plan to air all 12 episodes back-to-back over a six week run. The cast and crew are currently in production on a second CBC season in Montreal.
Haven: The Showcase series, set in Halifax, Nova Scotia, opened to almost 300,000 viewers Monday night, making it the highest-rated original scripted series ever on the Canwest specialty channel. The paranormal drama had a successful launch in the States as well, pulling over 2 million viewers for the premiere July 9 on NBC Universal-owned cable channel Syfy. The E1 series stars Emily Rose as an FBI agent tracking the unexplained in what is supposed to be a coastal community in Maine. Canadian Lucas Bryant also stars as her local cop partner.
Rookie Blue: The new Global cop caper, which airs episode four tonight, has earned a second season after arresting 1.9 million Canadian viewers in week three last Thursday.
That is the overnight, estimated BBM Canada tally and could wind up even higher. Global now says the premiere episode bowed to 2.1 million (up from the originally reported overnight estimate of 1.8 million), making it the highest rated premiere for a Canadian drama series in over a decade and the most successful Canadian drama ever commissioned by Canwest. Yes, it even beat Train 48!
Live! with Regis and Kelly: Monday’s episode of the daytime talk show, the first of four from Charlotetown, P.E.I., drew an overnight, estimated 968,000 Canadian viewers. That’s record for the show on CTV. Live! has averaged 417,000 viewers this season.
World Cup: It may be a stupid game, but a record 5.13 million watched Spain defeat the Netherlands Sunday on CBC for that soccer thingy. Another 685,000 tuned in to the french broadcast on Radio-Canada for a total of over 5.8 million. Almost 1.9 million watched Uruguay play Germany Saturday. 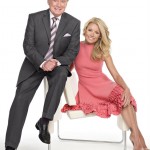