PASADENA, CA–On Monday’s long and winding bus ride from Warners (Suburgatory) to Fox (New Girl), critics passed by the seedy inspiration for a new Canadian series.
The Highland Gardens Hotel certainly isn’t much to look at. There are half a dozen other places just like it all within walking distance from the Chinese Theatre in Hollywood. Thanks to Stephen Markle’s 2004 documentary, it gained notoriety as the place Canadian kids lay their heads when they come down seeking fame and fortune in Camp Hollywood.
Plenty of Degrassi kids who chance Tinseltown during pilot seasons have left their initials on the walls. The Degrassi producers decided there was gold in the place, and The L.A. Complex, which premieres Tues. night on MuchMusic and CTV, is the result.
In order to shoot the series, a replica of the Highland has been built in Toronto on the Degrassi lot, which is kind of crazy ironic when you think about it.
I was invited onto the set several months ago and met with many of the stars as well as producer/director Martin Gero. Since he’d already helmed Young People F***ing, he seems like a perfect choice for this caper.

Gero actually stuck me into the background of a scene as an extra. If you look closely in episode five, that’s me as one of the doctors standing behind a patient on a table as aspiring actor Connor Lake (Aussie Jonathan Patrick Moore) barges drunkenly into a scene. The crew rigged me up with a surgical mask and a visor to try and tone down my otherwise electric star qualities.
Epitome publicist Iain Christiansen invited me to ham it up after he read about my cameo as “Minor No. 7” on Murdoch Mysteries. I looked like a show killer for a few weeks when City announced they were walking away from Murdoch, but CBC came to the rescue so my agent has been taking bookings again.
The series has been picked up in the U.S. on The CW, where  it will likely surface next summer. They’ll probably have to take the toned-down cut; a storyline about Canadian wanabees taking porn jobs had the producers banking fleshier HBO takes.
Read more about The L.A. Complex in this feature I wrote earlier this week for The Toronto Star. 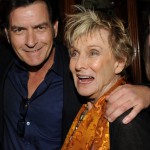 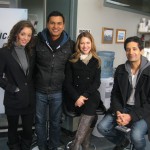