Signed up for a TV masterclass Wednesday morning with John Landgraf. The FX President was in Toronto along with FX EVP Eric Schrier, to talk about the cable channel’s latest content upgrade to FX Canada, as well as their ambitious plans back in the U.S.
FX Canada parent Rogers Media hosted the press breakfast at the Old Toronto executive club SoHo House on Adelaide, where Scott Moore, Rogers’ Broadcast President, is a member. Moore, Rogers’ EVP programming Malcolm Dunlop, programming director Hayden Mindell and, briefly, Rogers Media President Keith Pelley, all made the scene.
That there were bacon and eggs and those little sandwiches with the crusts cut off is usually enough to lure me out of Brampton, even in rush hour. Landgraf, however, was the real draw. He’s as impressive an executive as you’ll encounter in television–a savvy show launcher who understands both how to lure and develop talent and open and market a series. His track record speaks for itself. Very few FX shows fail.
He also seems to see the whole landscape and has steadily, in over a decade on the job, nudged FX into the upper tier of content providers.
Landgraf led Wednesday with the local angle: two of his new shows will be shot in Canada. Fargo is a limited series–something Landgraf preached we’ll see more and more of on his channels–spun off from the Academy Award-winning movie. The Coen brothers are in on it, but the 10 episodes will feature new characters and a different story. It is written by Noah Hawley (My Generation), who even the Coen’s feel has a spooky grasp of their own dense sensibility.
FX is still scouting locations but, according to Schrier, production will likely wind up in either Winnipeg or Calgary, and will begin as early as next winter.

Landgraf says this is an exciting time to be in television with an unprecedented migration of top theatrical film talent to the home screen. He says he can’t think of a filmmaker who “hasn’t been in our office in the last six months.”
This wave of film talent isn’t so much pitching to the heritage broadcasters, according to Landgraf, but to who he sees as the new Big Four: FX, AMC, HBO and Showtime. He backs that boast up with an impressive  breakdown of Emmy, TCA and even Peabody Awards divided between those four cable networks in the past few years.
Limited series is the best path to migrate that film talent to TV, he feels. Sam Mendes is behind a drama called Grand Hotel. Paul Giamatti is in on Mayflower, which Landgraf described as a dark look at the Puritan settlers at Plymouth Rock and their clash with native Americans. Tyrant is from 24‘s Howard Gordon. The Middle East drama will shoot in Morocco or Turkey. Ang Lee was set to direct but had to bow out for personal reasons. “Best pilot script I’ve seen in 20 years,” says Landgraf, a former NBC executive.
The other Canadian news was Toronto as the production base for The Strain, a vampire drama Landgraf says will not be anything like True Blood. “What The Shield (Landgraf’s first FX success) did for cop shows, this will do for vampire shows,” he says.
The teaser shown at the SoHo (all the FX clips were projected on an old slide screen, which warmed the heart of this 16mm film collector) had a Lost look: a commercial jet lands with a cabin full of dead passengers. Sketches showed the grotesque monster/vampires behind the parasite plague that follows.
Guillermo del Toro (Hellboy) is behind The Strain, as is Lost producer Carelton Cuse. Casting is underway. A pilot will be shot in Toronto in a few months with the series good to go in January.
When FX Canada was launched a year ago there were promises that Canadian producers and creators would eventually break into the FX lineup with true, Made in Canada content. That hasn’t happened yet, but Landgraf and Schrier were taking a few local pitches while they were in Toronto. (They turned down my suggestion: a sweaty, big city major is caught on tape smoking crack. Call it Canadian Horror Story). Besides their meetings here, they say a number of Canucks have come down to LA to knock on their door.
Hard to get in when you have the Coens,  del Toro, Ang Lee, Giamatti, Cuse, Gordon and many others American A-Listers (even Billy Crystal has a project in development, as does Danny McBride) in line ahead of you.
Don’t despair, Canada. Landgraf says the guys behind Legit, The Americans, It’s Always Sunny in Philadelphia and others on his network all walked in without a previous series credit. An ability to spot and a willingness to back talent is something Landgraf prides himself in. As he also pointed out, “Citizen Kane was Orson Welles first movie.”
Among the other announcements: FX Canada will finally be getting It’s Always Sunny (starting with Season 8 on July 4), one of those shows previously seen on other channels in Canada. It’s entering a 9th season, with The League (5th), Wilfred (3rd) Legit (2nd) and Louie all coming back, although the latter will be whenever Louie CK is ready. The comedian asked for an extended hiatus and got it. Schrier says new scripts are already written and production could ramp back up in September.

Landgraf is extending the FX brand into two new cable networks: Heavy on comedy, FXX–launching in Canada in January–will be aimed at 18-34-year-olds. FXM will be a new movie channel. This is not a “land grab,” he says, but an “extended footprint.” In order to fill out the schedules, FX will double its original content from 12 to 25 shows, putting it on par with heritage networks like NBC and CBS.
Some shows will move from FX to the new channels but most will stay put on the mother ship.
I asked Landgraf why grow networks at a time when networks are going the way of newspapers. There are rumours NBC and Fox are ready to go cable. Who needs FX-Y or Z when the big, on-demand change is a-comin’.
Landgraf admits that’s a question that keeps him up at night. Don’t worry, he’s streaming all these goodies, too. But he also doesn’t see the passive experience of enjoying television as something that is going to disappear anytime soon. He sees on-demand existing side-by-side with the old network system, and he says the advertising business backs up his theory, judging by their response so far to FXX and beyond.
As he often does, he pulled a few stats out of his head to back his vision of TV’s immediate future. A survey pegged the number of channels most Americans had in their home at 129 in 2008. That grew to 179 in 2011–a jump of 50–yet the number of channels regularly watched only went up from 17.3 to 17.8.
With the launch of the new FX services, Landgraf is looking to grow within the “watched channels” realm.
To do that, he’ll have to keep cranking out the kinds of innovative, critical darlings FX has been offering up till now. Sons of Anarchy, he says, is the network’s biggest hit ever. Justified is another series they’re pretty proud of at FX.

The explosion of new content includes The Bridge, a crime thriller set at the U.S.-Mexican border. It launches July 10 on FX Canada. Chozen, an animated comedy about a white rapper, has McBride and SNL‘s Bobby Moynihan in the creative mix. How and Why, a half hour about a guy who can explain nuclear reactors but can’t get a handle on his own life, hails from Charlie Kaufman (Eternal Sunshine of the Spotless Mind.)
There’s more, and the list keeps growing. As Scott Moore said in his introduction of Landgraf, the big theme coming out of the recent upfronts and Hollywood screenings is that all the U.S. networks are ramping up their content, big time. If you don’t own the content, heading into this God-forsaken, on-demand, TV-anywhere future, you are going to Hell in a handicam. Hopefully this make-your-own-shows mantra is another big lesson Landgraf’s Canadian partners are taking to heart. 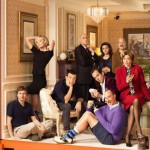 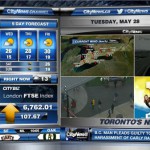