NEW YORK–The Big Apple has become one big TV factory. Several network and cable hits are shot in greater New York, including the reason I’m back for the fourth time this year, The Americans. The FX series is heading into a second season and hosting international reporters for cast interviews Thursday. It shoots in Brooklyn, along with The Good Wife, Blue Bloods, Girls and Boardwalk Empire. Elementary, The Michael J. Fox Show and other shows are in New York, taking advantage of generous tax credits and pleasing actors who prefer to live, in the case of The American’s Keri Russell, a bike ride from work.

New York, of course, has hosted TV shows before. There are several TV and movie tours of the city, including guided bus rides to sites from the Sopranos (“Stop at the Bada Bing”), Gossip Girl (“Pass the bank where Serena impersonated Lily…”) as well as Sex and the City (“Drink a Cosmo at Scout”).You can still take the “Real” Kramer tour of Seinfeld locales and take the TMZ bus tour of NYC (“see where celebrities go to get into trouble!”). TCM has a less sordid bus tour of famous New York movie locales, including that tall pointy building King Kong once climbed.
I took my own tour in mid town and walked into Sardi’s the legendary theatre district watering hole and bistro which dates back to the ’20s. The walls are still covered in over 1300 caricatures, with four TV icons from the ’50s still high up in the place of honor behind the bar: The original Honeymooners. Jackie Gleason, Audrey Meadows, Art Carney and Joyce Randolph. Nice homage to a show that dates back 60 years. How sweet it is. 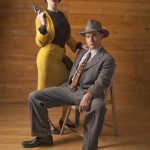 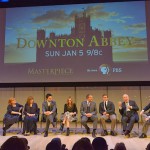