Will Community return to brilliance?
That’s the question as NBC brings the low-rated comedy-that-just-won’t-die back for a fifth season Thursday night at 8 p.m. ET/PT.
Things start off with back-to-back episodes. The horrible comedy Sean Saves the World follows along with a new episode of The Michael J. Fox Show.
The big news, of course, is the return of renegade showrunner and creator Dan Harmon, benched last season for, among other things, outing Chevy Chase as a supremely cranky, temperamental message leaver.
Harmon is, to borrow the old Reggie Jackson line, the straw that stirs this drink. Thursday night, he helps erase the stink of last season while getting plenty of digs in at his old bosses at NBC and Sony. He and only he can walk the Community tightrope.
Yet his task to completely revive this series seems impossible. Eccentric shows–and you don’t get any more eccentric than Community–generally wear out their welcome fast. That we’re still keen to see how Harmon can possibly top himself is almost the only reason left to watch.
Jonathan Banks (Breaking Bad) joins the cast as a criminology professor. He’ll be helping Jeff (Joel McHale) make the transition to faculty member, part of the excuse Harmon is using to stretch this series beyond last spring’s graduation storyline.
A drag for fans will be the lack of Troy (Donald Glover), whose disappearance will be explained, along with the reasons behind the total departure of Chase’s character.
As for Chase, I think its a shame whatever demons surfaced to do him in. The guy had an opportunity to go out on a grace note and seems to have blown it. Credit Harmon for at least trying in the first place.

I’ll take more Community, but I’m even more excited about another show returning Thursday on-line: Comedians in Cars Getting Coffee. Jerry Seinfeld’s coffee and cars web series returns for a third season on Crackle.com with the great Louis CK in the passenger seat. Who would not want to take a ride with those two? The ease of this series is just delight on wheels.
January is a very busy month of new and returning shows, with CTV’s horrible hospital drama Saving Hope also back at 9 p.m. ET/PT with more coma-inducing nonsense. To be fair, it’s all in focus and recorded at the proper audio levels.

Ring in the New Year with Farce and Ford 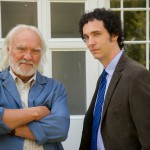