It’s just not New Year’s Eve without another Air Farce New Year’s Eve CBC special. The fun begins Tuesday night at 8 p.m. as Canada’s most famous comedy troupe spoofs headlines from the past 12 months.
The F-Bomb, of course, is aimed at several idiots, including Toronto legend Rob Ford, goofed on by Craig Lauzon in the catchy “Farce Film” above. Lauzon has shed so much weight over the past year he needed extra paddling to dress up as hizzonor.
The video is a parody of Robin Thicke’s “Blurred Lines” and has the mayor asking, “What rhymes with wussy?” He sounds more Curly Howard than Rob Ford to me but it works either way.
Chris Hadfield (being serenaded by David Bowie), Milos Roanic, Serena Ryder, Steve Smith (a.k.a. Red Green), P.J. Stock, Lloyd Robertson, Calgary mayor Naheed Nenshi and opera diva Measha Brueggergosman are also part of the fun, with Don Ferguson, Luba Goy, Lauzon, Alan Park, Penelope Corrin and Arnold Pinnock taking the Micky out of everybody from Justin Beiber to Pamela Wallin to Miley Cyrus.
Last year’s Air Farce NYE special was the highest-rated comedy special of the year in Canada. They’ve been an annual holiday tradition on TV for over 20 years.
Gerry Dee Live, featuring the star of Mr. d, follows on CBC at 9 with This Hour Has 22 Minutes Holiday Special at 10 p.m. The usual midnight specials, including Dick Clark’s Rockin’ New Year’s Eve with Ryan Seacrest, start at 10 p.m. 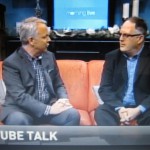 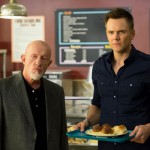