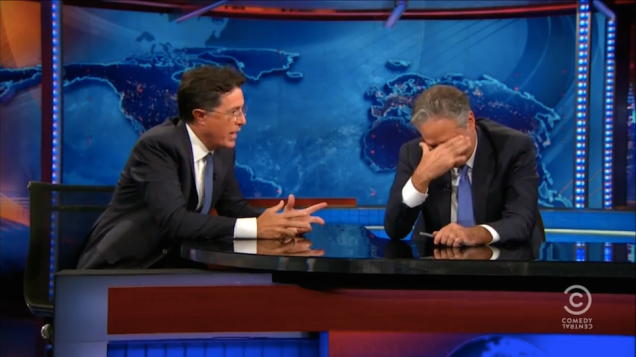 If you saw Jon Stewart’s final Daily Show Thursday night you already know he went out with warmth, class and laughs—but then you knew that before you saw it.

Stephen Colbert’s off-the-cuff remarks were the high point for me (although Springsteen was pretty cool. What—that guy never ages?). Colbert was right to credit Stewart with teaching all of those “special correspondents” on stage in that Manhattan studio a valuable lesson—how to craft a show with intent. Sure, we would have always taken 22 minutes of jokes every night. Stewart took the format he inherited, however, and added dimension, context and insight as well as plenty of lacerating wit. The bonus was he also crammed in the jokes and—in case you missed any punchlines—there were always those zany, over-the-top, Tex Avery-style cartoon overreactions.

Stewart’s parting sermon to stay vigilant and keep bullshit antennas high was a nice way to end his part of this conversation. He leaves behind plenty of understudies who are doing that job now, especially Colbert and John Oliver.

Having seen Trevor Noah wow the Just for Laughs crowd in Montreal two weeks ago, there is reason to believe he has the chops (along with plenty of charisma) to keep the Daily conversation going.

What Stewart brought which will be harder to find in late night TV is his impressive blend of passion and humility. You can tell he wants to make the world a better place, to right wrongs, to use his comedy platform to effect positive change. Not to put too fine a point on it—he noted on Wednesday night’s show he failed to defeat either ISIS of Fox News—but the man’s intentions went beyond the usual quota of laffs.

Yet he seeks no credit for any higher purpose, hides behind his self-effacing “fake news anchor” label and squirmed as Colbert singled him out for his leadership, both as a host and as a human being.  Instead he shifts the spotlight to the 100 other people who help make this perennial Emmy winner.

And yes, The Boss capped it with a sweet moment of Zen. 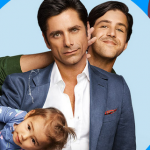