I Should Have Known Better: George Martin did that crazy-ambitious PBS history of recorded music project after all.

In an earlier post, I dug back into a TCA press tour moment from eight years ago to mark the passing of Beatles’ legendary record producer. At the time, in 2008, Martin stood before reporters to answer questions about a documentary series that seemed little more than a vague idea at the time. The ambitious project–which had a Toronto production connection–was supposed to look at 100 years of recorded music, with Martin helping to pull the project together. We were told it would air two years later, in 2010.

Well, Tomorrow Never Knows: it took another six years, but they did it. PBS plans to premiere Martin’s last work, the eight-part documentary series Soundbreaking, in November. The first two episodes were shown this week at SXSW.

Besides Martin’s work with The Beatles, episodes will focus on Phil Spector, Miles Davis, Marvin Gaye, Stevie Wonder, Giorgio Moroder and even Adele.

Martin teamed with his son Giles on the project. It looks amazing; check out the trailers above and below. 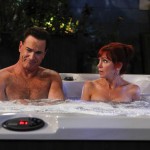