The Toronto Maple Leafs take their annual march to Elimination Day as another Stanley Cup playoff race begins. Simply can’t watch another collapse? There are plenty more shows this May. Please check back all month long as more entries are added. UPDATED May 24

Call My Agent! (Netflix). An English language remake of an acclaimed French-language comedy relocates the setting to London and follows the adventures of a talent agency and its clients, who are played by real-life actors. Look for Jack Davenport, Maggie Steed, Prasanna Puwanarajah, Lydia Leonard, and Jim Broadbent, while celebrity cameos from Helena Bonham Carter, David Oyelowo, Dominic West, and Emma Corrin.

The Staircase (HBO Max). Colin Firth stars as a crime novelist who has to watch his step after his wife (Toni Collette) died at their home from a fall down a flight of stairs. Was she MURDERED? A series of trials have failed to solve the case. The cast includes Juliette Binoche, Parker Posey, Rosemarie DeWitt, Sophie Turner, Dane DeHaan, Michael Stuhlbarg, Jim Rash, and Patrick Schwarzenegger.

Wild Babies (Netflix). This documntary, narrated by Helena Bonham Carter, is all about baby animals in the wild, shot in high definition. Look for tiny elephants, turtles, penguins, bears, monkeys, lions, and more.

Sheryl (Showcase; Crave). A documentary about Sheryl Crow looks at her personal and professional ups and downs. If it makes you happy.

The Kids in the Hall (Prime Video). They’re back — Dave Foley, Bruce McCulloch, Kevin McDonald, Mark McKinney, and Scott Thompson — and still kids at heart. This reight-episode revival of the original sketch comedy series, which ran from 1988 to 1995, is back for more headcrushing fun. Guests include Catherine O’Hara, Fred Armisen, Pete Davidson, Kenan Thompson, Will Forte, Tracee Ellis Ross, Jay Baruchel, Samantha Bee, and Eddie Izzard. Prime video will also premiere a two-part documentary about the troupe beginning May 20.

Thre Essex Serpent (AppleTV+). This six-episode, Victorian era drama stars Claire Danes (who stepped in for Keira Knightley) as a widow who moves from London to a small village in Essex. Is it really the home of a mythical creature? Also stars Tom Hiddleston, Frank Dillane, Hayley Squires, and Clémence Poésy.

The Time Traveler’s Wife (HBO; Crave). Rose Leslie stars as artist Clare Abshire and Theo James as librarian Henry DeTamble, a married couple who find themselves frequently separated as a result of Henry’s weird ability to travel uncontrollably through time to different periods in their lives. Based in the book and the forgetable movie. Six episodes, all directed by David Nutter.

So You Think You Can Dance (Fox; Citytv). The reality comeptition returns for a 17th season with Cat Deeley back as host. On the judging panel are Stephen “tWitch” Boss, Matthew Morrison and Dancing With the Stars season 30 runner-up JoJo Siwa.

Angelyne (Peacock). When I moved to Los Angeles in the mid-‘8ps there were billboards of this painfully-enhanced woman everywhere. Outside of LA, nobody has ever heard of her, but there she was, buzzing aound in her pink corvette. Emmy Rossum stars, with Martin Freeman, Hamish Linklater, David Krumholtz, Lukas Gage, Michael Angarano, and Alex Karpovsky in support. All eight episodes drop at once.

The G-word with Adam Conover (Netflix). The comedian looks into various topics and debunks a lot of myths.

Night Sky (Prime Video). Sissy Spacek and J.K. Simmons star as Irene and Franklin York, a retired couple who just happen to have a portal to another planet in their backyard. They’ve enjoyed this little extra for 20 years until a young man (Chai Hansen) shows up and things get a little dicey. The eight episodes can be streamed all at once.

The Kids in the Hall: Comedy Punks (Prime Video). This excellent, two-part documentary looks at the rise of the comedy troupe from their Quen Street West improv roots in the ’80s straight through to present day.

My Next Guest Needs No Introduction with David Letterman (Netflix). The fourth season featured interviews with Cardi B, Kevin Durant, Billie Eilish, Julia Louis-Dreyfus, Ryan Reynolds, and — taped before the Oscar slugfest — Will Smith.

Roadrunner: A Film About Anthony Bourdain (Crave). Documentary filmmaker Morgan Neville looks into the mystery surrounding the suicide of the globe-trotting celebrity chef in 2018 at 61. David Chang and Éric Ripert, along with members of Bourdain’s family, are interviewed.

Don’t Forget the Lyrics (Fox). A reboot of a music game show last seen in 2011 — so shouldn’t it be called don’t forget the game show about the lyrics? Niecy Nash hosts.

Prehistoric Planet (AppleTV+). This BBC-produced, five-part nature sries looks at wildlife on the planet back in the age of the dinosaurs, when host David Attenborough was just lad.

Stranger Things (Netflix). Season Four finally premieres after a three-year wait. Joining the series are Robert Englund (yes, the Freddy Krueger actor), Eduardo Franco, Mason Dye, Tom Wlaschiha, and Jamie Campbell Bower. Half of the none-episode order streams in May with the rest in July. A fifth and final season has already been ordered.

Elizabeth: A Portrait in Part(s) (Showtime). Director Roger Michell (“Notting Hill”) finished work on this documentary about Queen Elizabeth II on the day that he died.

Norm Macdonald: Nothing Special (Netflix). Most comedians are afraid of dying but not Norm Macdonald. He taped this special about a year before he died in case his leukemia rose up and took his life, which it did. Here we see him in his living room doing the last shtick he ever worked on. Take that, ghost of Dick Ebersole. With added commentary from Macdonald’s closest comedian friends including David Letterman, Adam Sandler and Conan O’Brien.

Tom Swift (The CW). This Nancy Drew spinoff stars Tian Richards as the fictional teenage billionaire inventor who thrilled young readers as far back as a century ago. Back when my dad was a lad, any kid who came up with a better mousetrap was a “Tom Swift.” Nowadays he’d be “Tom Swift and his Tik-Tok Identy Theft Machine.”

Dancing with Myself (NBC; CTV). A dozen contestants learn dance moves demonstrated by Shakira, Nick Jonas, and Liza Koshy. Whoever busts the best moves is declared Best Dancer of the Night by the studio audience. Hosted by Camille Kostek. 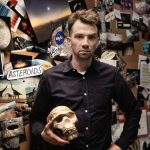