Battle of the Blades is one of those shows you really should see live. The skating performances look great on camera, but there is a big event energy to an actual taping as I discovered again Sunday night at the Mastercard Centre.

This was my first time in the new venue–Blades taped season one in Maple Leaf Gardens and season two in a huge studio down by the Toronto waterfront–and the Mastercard Centre is the perfect setting. The Leafs’ practice facility dresses up nicely for television, with a gigantic, wrap around scrim used to great effect for projecting backgrounds, high-definition video and other effects around the top half of the building. The ice surface is 200 ft. long so that curtain must have taken every available scrap of canvas in the country.
All three final pairings–Tessa Bonhomme and David Pelletier, Tanith Belbin and Boyd Devereaux and Marie-France Dubreuil and Bryan Berard–skated well in Sunday’s performance finale. As judge Sandra Bezic pointed out, Bonhomme in particular dazzled with her arms perfectly extended during a long, high lift. Not bad for a defenceman. A winner will be declared tonight starting at 8 p.m. on CBC, with $100,000 going to the top pair’s charity.
The other pairs will win big money for their causes, too. The 2nd and 3rd place pairs get $35,000 and $30,000 this season, up from the $25,000 offered in previous years. Host Ron MacLean estimated the series has given away about a million dollars to various charities over the past three seasons.
MacLean seems to have a great time hosting a  a show on his cool Nike skates. Maybe it is also because he can skate away anytime from his ol’ Coach’s Corner pal/nemesis Don Cherry, who will be back at the judges’ table tonight.
Grapes, sporting a hand-painted tie Sunday night with a portrait of the original Blue on it, says he’s genuinely blown away with how these former NHLers can learn to figure skate so effectively in such a relatively short period of time. He’s an effective judge, too, responding to the skates and also providing insight into the careers of the hockey players involved.

Both MacLean and Cherry hung around after yesterday’s show to autograph copies of MacLean’s new autobiography Cornered: Hijinks, Highlights, Late Nights and Insights (HarperCollins). The book, co-authored by Kirstie McLellan Day and with an introduction by Grapes, is already a Canadian bestseller.
The skaters had plenty of supporters in the stands at the rink Sunday night. Pelletier’s former partner Jamie Sale sat front row with their son, who got a spin around the ice on his dad’s shoulders. Dubeuil also took her 10-month old daughter for a glide around the rink.
Berard says he’s shed close to 20 pounds since training began for this edition of Battle of the Blades 11 weeks ago.
Like almost every other CBC show this fall, ratings are down a bit on Battle of the Blades but still robust enough at well over a million viewers each Sunday that it will be back for a fourth season–provided enough hockey players step up to the challenge.
Battle of the BladesCBCDon CherryRon MacLeanUncategorized
Prev Post

Video: Brioux gets iced on Battle of the Blades 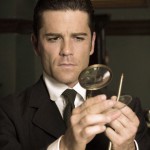