There is plenty to shake out of the TCA Winter press tour bag, including a few programming notes. Tonight on Modern Family, a milestone is reached. To quote executive producer Steve Levitan from last Wednesday’s ABC comedy showrunners panel, “Lily says fuck.”
That’s right, the cute little two-year-old toddler is a potty mouthed princess.
Or not. While she appears to drop the F-bomb, and her mouth is pixilated on tonight’s episode, Levitan clarified later that what the child actress actually said during the taping is “fudge.”
Justin Trudeau should have tried that excuse.
Levitan says the goal on Modern Family is to “show an extremely realistic interpretation of modern family living.” That’s why the comedy is shot in a mock documentary style.
He’s right on about innocent kids sometimes blurting out things that sounds inappropriate. I’ll never forget riding bikes with my daughter Katie when she was a cute little four-year-old, she on her tricycle, me on my 10-speed. We were in a park on a beautiful summer day, pedalling past a hydro box that had graffiti spray-painted on it. “I know what that says,” Katie told me with the kind of sunny self-assurance usually reserved for a good report card. “That says Fuh-kk.”
I’ll never forget her sweet face and the sound of that one syllable word coming out of her mouth as two.
The hard part was smiling back, not falling off my bicycle, and otherwise showing no visible signs of over reacting. Mental images of all her little friends raced through my mind.
Also troubling: unless I was completely out of the street level loop, the graffiti did not appear to say anything of the sort.
So, yes, Art Linkletter was right. Kids say the darnedest things. See for yourself tonight at 9 p.m. on City and ABC. 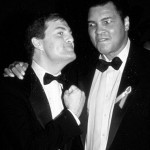 Meeting Muhammad Ali was the greatest