Usually, there are four or five set visits during a Winter or Summer TCA press tour. It is cool to see set designs and furnishings up close, but this month brought something different and long overdue–a visit to a writer’s room.
It occurred last week on the storied Paramount lot off Melrose in Hollywood. A bus load of reporters arrived at the Mae West building (you’d think it would be curvier) and were taken upstairs to where the Hawaii FIVE-0 gang puts together episodes each week.
Why isn’t the writer’s room, like the production, based in Hawaii? EP Peter Lenkov says he didn’t want to pull his staff of nine that far away from their lives and family. . Besides, LA isn’t exactly Buffalo in the wintertime.
The writers do get to fly out to Honolulu to be on set during production of shows they have written, so they get the best of both worlds.

I asked Lenkov if he had any Canadians on his staff. “Besides me?” he answered. A Montreal native, he’s written for 24 (picking up an Emmy nomination), CSI:NY and many other shows, including La Femme Nikita. Read more an how a kid from Montreal gets to Hawaii–via Hollywood–here in this feature I wrote for The Canadian Press.
You can tell Lenkov has lived in the States too long–he roots for the Kings now, not the Canadiens.
The episode they were working on while the press visited was unusual. CBS ran a promotion on the FIVE-0 website where fans could suggest plot twists and other details. That week’s murder weapon–a stiletto heel–was even chosen by fans. The writer’s then had to weave it into their story.
So, really, fans wrote that week’s script. Pretty crafty, Lenkov.
The heel, however, will be used in an unusual way. We were all sworn to secrecy. The episode will likely air in April. 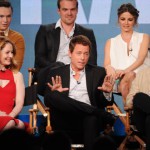 Kinnear gets Raked over by the foreign press 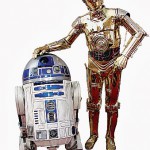