SUDBURY, Ont.–They still pull nickels out of the mines in this Northern Ontario town. The latest precious resource, however: TV shows.

There are a bunch of them shooting this year in Sudbury. I flew up this week to wander the set of Letterkenny, a hilarious take on small town dudes spun off the viral web hit “Letterkenny Problems.” One webisode has drawn over 3.4 million hits so far. All together, the series has pulled over 10 million views.

Jared Keeso from 19-2 dreamt up this nutty little idea with a few of his hockey pals, including co-star Nathan Dales. Dylan Playfair (Some Assembly Required) and Andrew Herr (Mr. Hockey: The Gordie Howe Story) play the clueless hockey dudes.

It’s kinda based on “chirping,” all the deadpan put downs dudes from small town southwestern Ontario string together. These zingers are part of their farmland DNA.

Canadian Screen Award winner Keeso originally hails from Listowel, Ont., and, well, you can take the boy out of the farm but you can never take the farm out of the boy.

The chirps are hilarious because they’re edgy and wrong and that’s also why I haven’t reprinted any here. Well, here’s one: “Buddy, you’re softer than a Tootsie Roll fruit cup.”

Six half-hour episodes of Letterkenny are before the cameras now and by early 2016 they should start running on The Comedy Network, Crave TV and iTunes.

The production company behind the series is New Metric Media. Others wanted it but these dudes spoke the same chirpy language. New Metric’s Mark Montefiore (Picnicface) says the company has another comedy shooting in Sudbury starting in August: What Would Sal Do? goofs on Catholic guilt. Andrew DeAngelis created the series, which looks at a slacker who is approaching 30 and still living in his parent’s basement. His mom confesses that the birth was divine intervention. That makes our boy Sal the next Son ‘O God. But he’s a slacker! What Would Sal Do?

Eight episodes are being shot for Super Channel. Look for this one in early ’16, too. Halifax’s DHX Media is shopping both shows international so book your meeting on their yacht at Cannes now for MIPCOM.

Funny dude Mark Forward (Mr. d) is appearing in both shows so look for him at the Sudbury airport.

Montefiore has two other series in development. One is a sensational, ripped-from-Canadian-headlines mob story and the other will wade into the chilling Paul Bernardo murders. Karen Walton will be scripting the latter.

TV crews are also stalking Sudbury for other projects. Two Hallmark movies are currently shooting in the nickelbelt. Where else would you shoot Christmas TV-movies in June? Santa’s reindeer could be pulled by mosquitoes. Montefiore says, on top of the healthy Ontario tax credit, Sudbury also offers these generous heritage grants. “It’s the best place anywhere to be shooting right now,” he says. Chrip away, Toronto and Vancouver. 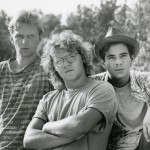 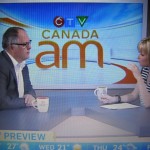 A quick guide to a Zoo full of summer shows