Can it really be Norman Jewison’s 90th birthday? The dean of Canadian-born directors is an ageless wonder who still looks only a crew away from directing his next feature film. Jewison was an honored guest at the Canadian Film Centre’s annual garden party last month in Toronto. He founded the place, so that seems about right. I told him one more time how much I like his first film, “40 Pounds of Trouble.” Again, he just shook his head and laughed.

I first met Jewison in 1982 after he gave an address to film students at the University of Toronto. The head of the film department, smooth and savvy professor Gino Matteo, asked me to do a caricature of the director which he presented at the end of the talk. My reward was getting to follow the two of them up to the roof top bar of the Park Plaza, where I sat and listened and crammed a Masters of Film into 120 minutes.

I listened to Jewison talk about, among other things, how he was able to keep Burt Reynolds’ usual hammy shtick in check  on his most recent movie, “Best Friends.” Reynolds starred opposite Goldie Hawn in the 1982 romantic comedy.

After a few takes filled with Burt’s usual eyebrow wiggling and other mugging, Jewison told me he pulled the action star aside and asked him to save all that good stuff till the end of every take. Then Jewison simply cut it all out!

The CFC has a handy link up now to “13 Must-Watch Norman Jewison Films.” Find them here. Especially check out director John Landis’ salute to one of my favourite films from Jewison or anybody else: “The Russians are Coming, The Russians Are Coming.” This mid-’60s winner is a delight from the catchy opening credits to the last frame, with great comic performances from Alan Alda, Carl Reiner and Paul Ford among others. It’s a wide-screen wonder that never lags, with Jewison at the top of his game as a visual storyteller who lets his actors fill the screen.

One other thing: if you’ve been glued to the Republican National Convention all week, you owe it to yourself to seek out and stream “The Russians Are Coming…” immediately! This sane satire from the height of the Cold War may be the only antidote to four days of fear mongering and jingoism run amok. 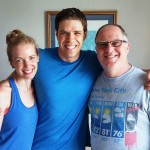 This week: no sight, no problem for TARC team in Vietnam 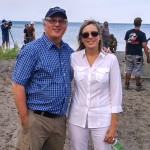 Canada: The Story of US to celebrate Canada 150