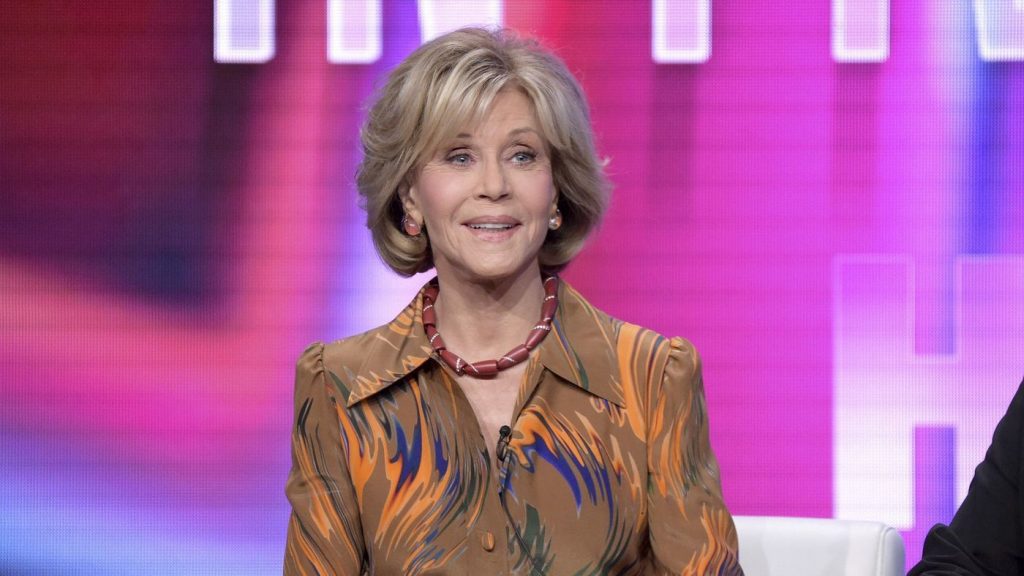 BEVERLY HILLS, Calif. — You don’t have to stay the full two weeks-plus to get a lot out of the summer TCA press tour.

A quick two days was good enough for me this July. Here’s how it went.

First, it had been four summers since I had been on the summer tour. They’d built a whole new hotel, LA’s Waldorf Astoria, on the bow of the prime piece of real estate at Wilshire and Santa Monica where the Beverly Hilton is situated. Last time I checked, they still had Trader Vic’s down there, although it was pretty much boarded up.

The folks at National Geographic Television took full advantage of the fancy new property by hosting an opening night tour party up on the WA’s roof, complete with inflatable sharks in the pool and real life puppies in a pen. The sky deck also offered a hell of a view of Los Angeles at night (see below, looking west towards the ocean). 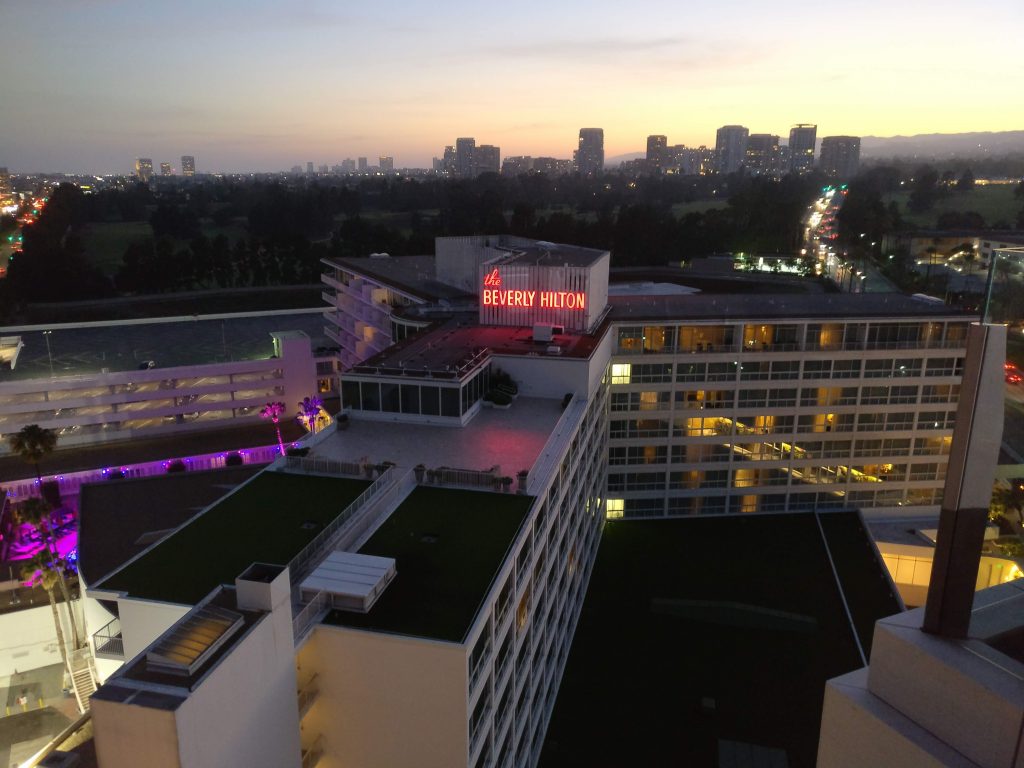 There was also cake, some of it shaped like sharks. A few celebs made the scene, including Bradley Whitford, Lamorne Morris and Arianna Huffington, all involved in an intriguing Nat Geo six-part drama about the early days of the Internet titled Valley of the Boom.

Next door at the Beverly Hilton, the hotel seemed to pay homage to that early ’90s era but providing the worst WiFi service since Napster was a newbie. Seriously? It’s 2018 folks, fix it. 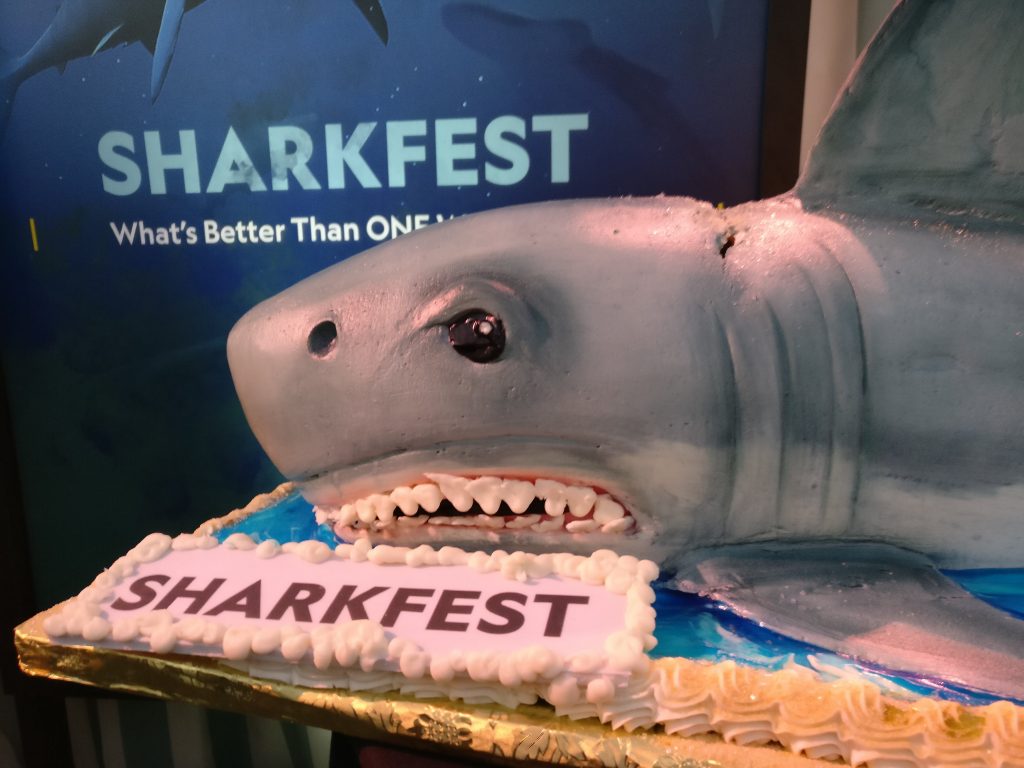 The next day began with HBO and there was a lot to cover. The premium pay channel generally does not allow talent to scrum with the great unwashed, with the stars ducking backstage and directly into limos. Some are escorted over to other ends of the hotel, where they sit for one-on-ones or round table sessions with international reporters. That’s a big bonus for the fortunate Canadian typists who get to work both ends of the hotel.

Worried that Trump will soon slap a tariff on this double dip, I scrambled down to LA to talk to Hollywood legend Jane Fonda — the subject of an HBO documentary airing in September — and Jennifer Garner, who is starring in a comedy that was adapted from a British series, called Camping. HBO had six panels altogether in the big room, including an opening  session with Last Week Tonight host John Oliver.

The bad news for me was that the airline I rode down to LA on somehow lost the carry-on luggage they made me check in when I boarded the plane in Toronto. How do you lose a small suitcase that is literally handed to a baggage handler to walk about 50 feet over to a cargo bay? Anyway, they did, and for two days I was without socks, underwear, some fashionable shirts and eye drops.

Not being able to see the new offerings is occasionally a blessing at press tour but this was HBO, and Nat Geo, and no time to go eyesight optional.

I was also bummed that Jane Fonda didn’t get to see the nice shirt I had picked out for her interview. Instead I walk into her hotel room and there I stand, looking like her dad Henry in “The Grapes of Wrath.”

Fonda was very gracious, and interviewing her was a delight. Not a lot throws me at press events anymore but Fonda was every bit as whip-smart and intimidating as I’d hoped. When I told her I really liked the documentary (directed by PBS filmmaker Susan Lacy) she immediately sat up, leaned in and asked, “What exactly did you like about it?” There’s no bullshitting around with Jane, and that was good and bracing.

The film is called Jane Fonda in Five Acts and at 80 she has made the most of all of them. She’s won two Oscars, survived being branded a traitor for her very public efforts to stop the war in Vietnam and weathered the likes of Roger Vadim, Tom Hayden and Ted Turner. Then there is the whole fitness thing, too, although I forgot to ask if she still has any of those woolly leggings.

Most fun of all was getting her take on some pointed Canadian questions. More about that in a future post when the story goes to print. 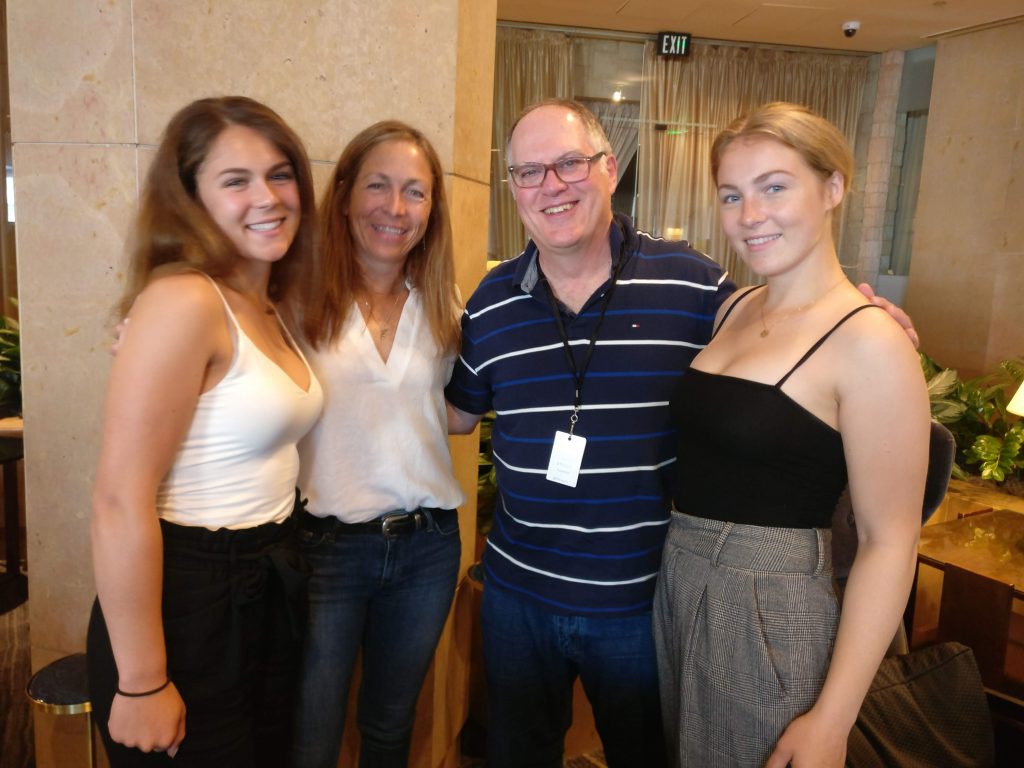 Another delight was meeting Dr. Michelle Oakley, Nat Geo’s “Bad Ass Yukon vet.” The Illinois native settled in the Canadian north several years ago after studying veterinary sciences in Michigan and P.E.I. and interning at the Calgary Zoo. She met her Canadian-born hubby Shane Oakley during her college years and now has been to more provinces and territories than most folks born in Canada.

Oakley made the TCA scene with two of her three daughters, Sierra and Maya. One is studying at Western in London and the other is at university in Nova Scotia.

Oakley treats 1200 pound grizzlies and all manner of wildlife, so to her, the critics were basically pussy cats.

The HBO publicist who introduced John Oliver joked that she had to cut it short because “he’s British and any form of kindness makes him uncomfortable.”

I don’t know about “any form,” but I saw him squirm a few years ago when I suggested his series was a major reason we still had net neutrality (more threatened than ever now under the Trump administration).

Towards the end of this week’s main ballroom HBO session, I badgered him to give me a quote about Canadian politics. It seemed to spark him into delivering some shtick.From the transcript:

QUESTION:  How do you know I’m Canadian, eh?

JOHN OLIVER:  So, you have a key tell. 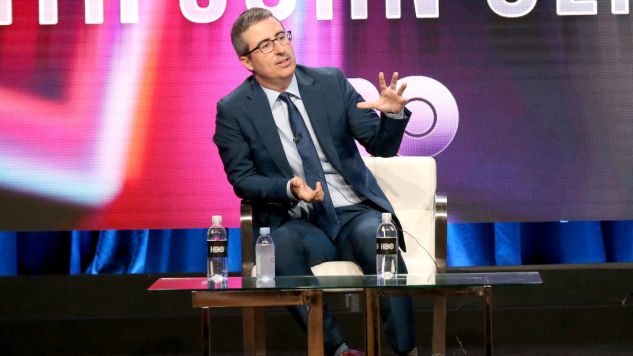 I was trying to get Oliver to weigh in on Canadian prime minister Justin Trudeau’s notorious trip to India last winter, the one where photos were snapped of the entire family decked out like servers at Tandoori Flame in Brampton.

I didn’t hear what I felt I needed to top a planned press tour feature for The Canadian Press, so I asked him to expand on his answers, “so I have something to bring back to my Canadian newspaper.”

“That could be the single most honest question that TCA is going to get in three weeks,” he said. “Can you expand on that comment, just so I can bring back something? Other than saying, yes, there was a Venetian-style buffet.”

He then went on to serve up exactly what I was hoping to get:

“It felt like that Indian trip, he had overshot the runway of his own popularity. It felt like for the first time, he singed his fingertips on people going, “You’re not quite that charismatic to pull off a trip like that.” Does that help?”

Yes John, helped a lot. When you only have a day or two to get the right quote at a TCA press tour, you can’t come home empty handed. Mission accomplished.

Read more about Last Week Tonight with John Oliver and other TCA summer 2018 press tour news here at this feature I wrote for The Canadian Press. 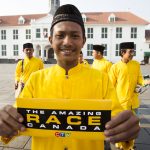 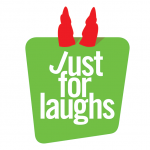