Watching the first two episodes of Son of a Critich brought me right back to the first time I saw The Wonder Years, the original, ABC version which premiered in 1988.

This was back when I was working at TV Guide Canada. That show seemed so based on my own suburban childhood I expected residuals. Buttons were pressed, right down to the year, the music and the home movie titles. It was one of the best comedy pilots many of us in that office had seen up to that time.

Happy to report that Mark Critch and Company have crafted an authentic, East Coast Canadian Wonder Years. Drawing from his memoir of the same name, the This Hour Has 22 Minutes sniper has teamed with Tim McAuliffe (Corner Gas; The Office) in spinning his own adolescent experiences into a very enjoyable sitcom.

Well cast is Benjamin Evan Ainsworth as Critch at 10, a lad about to catch the bus to the Hell known as Middle School. It is St. John’s but it could be Mississauga or Ottawa or Regina. There are bullies and snitches and nuns with straps, just as there were waiting for me as a lad in Etobicoke.

This kid is no athlete or brainiac but he knows how to survive – by telling jokes.

“I didn’t think I needed orthopedic shoes,” he tells two potential bullies. “But I stand corrected.”

He poaches material by watching Don Rickles on Johnny Carson at night with his eccentric, radio reporter dad (played from memory to be sure by Critch).

The show has everything – strap-happy nuns. Music by Rush and Dean Martin. Even has a (gasp) Wayne & Shuster lunch box!

Clair Rankin plays gossipy mom Mary Critch, Colton Gobbo is long-haired older brother Mike Jr. and Sophia Powers is effective as intimidating school crush Fox. They are caricatures, sure, but there are moments when you care about all of them, which sets this sitcom apart.

The cherry on top is the great Malcolm McDowell as “Pop,” the Critch’s live-in granddad. He shares a room with young Mark, smokes in bed and moons the kid every morning. He brings foil to funeral parlors to smuggle out sandwiches. McDowell hasn’t had this much fun since “A Clockwork Orange.”

Son of a Critch is for anybody who ever had a crush, got the strap or dodged bullies with a joke. From Project 10 Productions and Takes the Shot Productions, the series premieres Tuesday night on CBC and at CBC Gem. 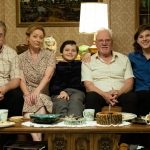 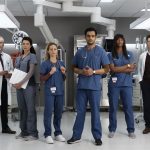