Sometimes when critics try to tell people to watch certain shows it just comes off like your parents telling you to eat your vegetables. I lost count of all the columns I wrote about how brilliant Arrested Development was. Did those columns save that show? They did not.
Still, there’s no harm in trying. Sunday Star entertainment editor Garnet Fraser wanted to shed some light on two comedies he loves that got left behind in the rush to champion Glee and Modern Family last season–Community and Cougar Town. So he asked me to write about them. The story is in today’s Toronto Star, you can jump to it here.
When I went to transcribe my interview with Cougar Town creator Bill Lawrence, I found the former Scrubs showrunner to be as articulate as ever on the whole TV scene. (It wasn’t that I’d forgotten how smart and candid Lawrence is but I could barely hear him when I stood next to two or three other reporters at ABC’s crowded and noisy press tour party last month at the Beverly Hilton.) Lawrence explains that networks today will only listen to a high concept pitch. A show has to have an easy to get hook. His was take one of the hottest stars from Friends, Courteney Cox, and cast her as a single mom trying to avoid becoming a cliche cougar.
ABC bought it but that was never the show Lawrence wanted to write and its not what it is now. Cougar Town is a warm, sweet show about a close group of forty-ish Friends.
Lawrence admits the title is a double edged sword. People get it, but a lot of people hate it. He says they tried to find another name, going through suggestions like Sunshine State (it’s set in Florida) and even Family Jewels, although, as Lawrence says, “why not then just call it Balls.”
Call it what ever you want, but watch it when it returns Wednesday at 9:30 on ABC and Citytv. Cox’s old Friends friend Jennifer Aniston guests as a self obsessed shrink. Community returns with an even hotter guest star–Betty White–Thursday at 8 p.m. on NBC and Citytv. 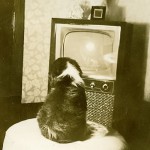 Commander Tom, Kiddo and Me 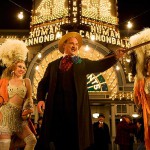