Tonight at 10/9c is the season finale of Mad Men (AMC). This is the end of Season Six, or as its known at my house, the year I stopped watching every week.
I’ll catch up; this is still a great TV show. The first three to six episodes just seemed a little shark jumpy to me. Where was the snappy bot mots from Roger? What was Don such a total douche bag? And another merger? This firm changes names more often than the Leafs change goaltenders.
Storylines involving Pete, Peggy, almost everybody, were just so relentlessly glum. The series got too soapy for my tastes, too manipulative. I was set for great theatre built on this tempest-like stage that was 1968, a year of searing drama. For me, the series seamed strangely, and for the first time, out of step with its era.
My daughter, Katie, who adds the drawing of Ginsberg, above, to her Mad Men sketches this season, says I am a big dum-dum for not sticking with the series in real time. She maintains that this is a terrific season, albeit one that was slow to build.
She’s holding her breath to see if Megan survives; there are rumours Jessica Pare is a goner.
Creator Matthew Weiner usually packs his shockers into the second last episode, so that would indicate Megan has survived. Weiner, however, loves to zig just when you think he will zag, or in this case, zou-zou? 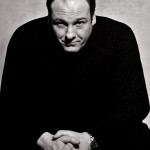 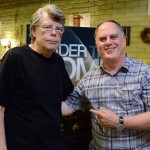 Going Under The Dome with Stephen King