Monday night at 9 p.m., CTV launches The Amazing Race Canada. The series is expected to draw a big summer crowd in Canada; I’m betting at least two million viewers for the premiere. Hopefully that will boost lead-in Satisfaction, CTV’s new Toronto-lensed sitcom, which airs at 8:30 p.m.
Viewers tuning in to The Amazing Race Canada will see nine teams compete for a huge prize–$250,000, plus trips for two anywhere Air Canada flies and two brand new Chevy Stingrays.
Things have come a long way since I was a contestant on CFTO’s hokey trivia game show Guess What? back in the ’80s. Hosted by Robin Ward, the haul from winning four or five episodes included running shoes, bathing suits, a sewing machine and a word processor–back then a crude laptop which could barely hold enough letters at a time for a tweet.
By not winning seven games in a row, I missed out on the grand prize–white water rafting down the Ottawa river. I kid you not.
The winner of Monday night’s first leg of TARC also get a bonus prize, one that would serve as the ultimate prize on pretty much any other Canadian reality show–two tickets to Sydney, Australia.
Olympic Gold Medalist Jon Montgomery puts down his beer long enough to host tonight’s debut. Featured are nine teams, including “Body Break” stars Hal Johnson and Joanne McLeod, billed as “fitness icons” on the series.
The other teams range from gay cowboys to married doctors. One contestant is missing both feet; Jody Mitic, an Afghanistan War veteran, stepped on a land mine in 2007 and is lucky to be alive. Wearing prosthetics, he races with brother Cory.  Another player has Parkinson’s; Tim Hague, Sr., from Winnipeg and competes with son Tim Jr.
There is no team from Toronto; the Ford brothers were going to take a crack at it, but backed out at the last minute.
I recap the first episode for The Toronto Star and will link to it here once it’s up. 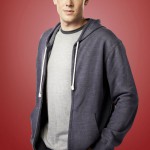 Talking through the sad news of Cory Monteith