A decade has quick-stepped into history on Dancing with the Stars.

The ABC celebrity talent/variety show celebrated the milestone Tuesday with a 10th anniversary special. Forty-five stars returned to the ballroom (really CBS Television City Studios in Hollywood) to mark the occasion. As a result, the state of California reported a severe spray tan shortage.

The hour-long special drew close to 10 million U.S. viewers in the overnights, beating The Voice in the timeslot in total audience on NBC and second only to NCIS on CBS. In Canada, the show can now only be seen on U.S. network affiliate border stations. Bell bounced the show from CTV to CTV Two to M3 in recent years before quietly dropping it this season (along with American Idol). The reason? It skews old, making it a tougher sell to advertisers.

Among all the big-budget TV talent shows, DWTS is unique for keeping its original judging trio intact–head judge (and producer) Len Goodman, Carrie Ann Inaba and Bruno Tonioli. These three have always been entertaining and, remarkably, still seem into it, which helps the audience feel that way too.

I’ve always felt adding a forth judge–guests at first but for the past few seasons Julianne Hough–crowded the desk and slowed down the show. Also Hough should not be judging while her brother, Derek, is competing. There’s more than a mirror ball trophy at stake, with the pro-dancers and celebrities getting paid more the longer they dodge elimination.

The show has veered into infomercial territory and at times has felt like a two-hour marketing tool for Disney’s theme parks, animated films or music. Many of the celebrities are from other ABC/Disney properties, including The Bachelor, ABC Family network shows or in-house soap operas.

Still, if this is vertical integration on a dance floor, it is at least entertaining. Credit quick-witted host Tom Bergeron for keeping it live and present each week. The celebrity level seems to slip further down the D-List each year, but the real stars of the show seem to be the pro dancers anyway, especially the Chmerkovskiys, Derek Hough, Peta Murgatroyd, Mark Ballas and Witney Carson.

Read my full recap of the DWTS 10th anniversary special here at The Toronto Star‘s website. 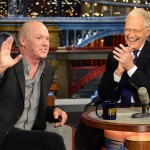 Letterman Must See again with just 16 shows to go

This week’s podcast: death in the Partridge Family