Sure, barriers are coming down and people are taking tentative steps back into stores and restaurants — maybe even schools. Still, a lot of us are continuing to stay close to the couch. What should we be watching on TV?

Check my recent reviews on the excellent British documentary “My Generation,” hosted by Michael Caine, as well as my three finger and one thumb up on the new generation of Looney Tunes cartoons ow playing on HBO Max. Below are three more shows on TV now that I recommend:

Ted Lasso (AppleTV+). We all need a good laugh, right? Here’s a series that is funny and strangely sweet despite being spun-off from a one-joke, seven year old, NBC Sports commercial: former SNL player Jason Sudeikis stars as Ted Lasso, a Texas football coach with a reputation as a minor league lifer. Out of nowhere he gets hired to coach a Premier League soccer team in The UK.

Lasso knows nothing about the “other” football or England for that matter. He’s shocked to learn games can end in ties. He has a hard time thinking of a sport played in two halfs. He thinks tea tastes like brown water.

He got the gig out of vengeance. The new team owner (Hannah Waddingham) wants to crush the old team owner (her cheating husband) by skidding the franchise right out of the Premiere league.

Think “The Producers” meets the beautiful game. I was also reminded, slightly, of Alan Partridge, except Lasso is more nice guy than narcissist. He gets brutalized in his first British press conference, but shrugs his shoulders and puts “BELIEVE” signs up in the dressing room. The more we learn about Ted, the more we root for the dude.

“Cottagers and Indians” (CBC Gem). Here’s a documentary that hits close to home. Drew Hayden Taylor is a novelist and playwright who is a member of the Curve Lake First Nations. He has dramatized and now documents a real stand-off between indigenous peoples and cottagers over the waters they share.

One one side stands James Wheytung who has been cultivating wild rice on the Trent-Severn waterway. Wheytung sees the artifically swollen river as farmland and has been hurling seeds from his fanboat with a feverish committment. The resulting crops have angered cottagers who have seen the riverbeds just beyond their docks turn into reedy green fields now unnavigatible for boats or swimmers.

Taylor tries to walk the line and be a peacemaker but there is little sign that compromises can be reached. We see outrage at community meetings and defiance from Wheytung as he hurls seeds ever closer to the dock of the elderly couple who have appealed to various levels of government to halt the planting.

Taylor visits two other areas of indigenous-settler conflict in Canada, including one ten miles from where my family has cottaging for 73 years: Sauble Beach, Ont. The Saugeen Nation there are far less confrontational than Mr. Wheytung and committed to tourism and most importantly have no crop to plant in deep Lake Huron, but the issue of who owns what holds as true there as it does for residents of the Severn, Toronto or Winnipeg.

On another side note: my grandfather used to fish for Muskellunge in the weedy waters of Rice Lake — part of the same Trent-Severn water system. So that’s where that name came from.

The documentary is hurt by a lack of on-screen commentary from government officials, cottagers beyond the main couple featured and their friends and allies (and customers) of Mr. Wheytung. A female doctor is introduced as a white woman who gets it and sees Wheytung’s campaign as a just way for the land to be restored to its primary purpose two centuries or so ago. Her testimony, however, loses power the minute we learn that she and Wheytung are a couple and, together, the primary rice seed hurlers.

This is a documentary without a final chapter. Sadly, the lack of willingness for other voices to even weigh in on camera suggests that a resolution to this conflict may be many years away.

Lovecraft Country (HBO, Crave). This historical horror series is set in the ’50s. It follows a young African-American named Atticus Freeman (played by Jonathan Majors) as he travels the U.S. in search of his father. Many horrors ensue. Jurnee Smollett and Courtney B. Vance (above with Majors) also star.

The back story is as intriguing as the plotlines. The original inspiration comes from the novels of early 20th century author H.P. Lovecraft, whose unease and prejudice against people of colour was woven into his tales of terror. Those stories were thrown into a blender by author Matt Ruff, who used the weird tales to craft his 2016 dark fantasy novel “Lovecraft Country.”

With this series, showrunner Misha Green (Underground) focuses on Ruff’s African-American characters who were historically excluded from this kind of pulp fiction. If ever a series was ripe for these times of nervous issolation and Black Lives Matter awakenings, this would seem to be it.

Consider, however, the other showrunners behind it — blockbuster film producer J.J. Abrams (the re-booted Star Trek films) and Jordan Peele (the re-boot of The Twilight Zone). These two know how to throw a good scare into an audience. As a result, you get less of a conscious-raising social reckoning than a scary-as-F thrill ride where super vampire demons with zillions of eye balls are lurching and shredding from the shadows.

Not for the squeamish, then, but this eight episode drama will take you far away from this week’s U.S. political convention coverages — and other real time horrors. 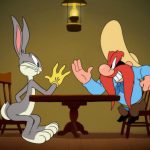 What’s up, doc, about those new Looney Tunes on HBO Max 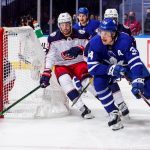