No, these aren’t the stars of CBS’s fall rookie dramas. These are five “Pioneers of Television”–Martin Landau (best known for Mission: Impossible), Nichelle Nichols (Lt. Uhura on Star Trek), Mike Connors (Mannix), Robert Conrad (The Wild, Wild West) and Linda Evans (Dynasty).
PBS has hosted icons from the past at the last three summer press tours to promote this series, an uneven tribute to the Golden Age of television. These sessions, in fact, are generally much more entertaining than the series, especially one hilarious encounter a few years back dominated by Red Buttons and Mickey Rooney.
Evans, 67, was the kid of this crop. She was on stage mainly to take a bow from her TV debut on The Big Valley. That western starred film legend Barbara Stanwyck and Evans was lavish in praise of the actress.

The former Dynasty star was modest about her own talents but seems pretty savvy as a business woman. She says Mattel is coming out with a Barbie “Krystle” Dynasty doll and she gets a cut. There’s also a brand new “Big Valley” feature film in the works, with Jessica Lange in the Stanwick role.

Landau was the one “pioneer” who is still working, appearing recently on Entourage. He talked about his many movie roles, including a memorable turn as Bela Lugosi in Ed Wood. He saw Lugosi as a classic Chekhov character, a tragic figure.

The 82-year-old actor says never met Lugosi (who died in the ’50s) but did have “sandwiches and tea” once with another iconic horror star, Boris Karloff. It was the early ’60s, and Karloff had just shot a movie with a student of Landau’s, Jack Nicholson. Landau asked how that went. “Oh dear, poor boy,” said Karloff, who didn’t think Nicholson would have much of a career.
Landau also said he turned down about as many roles as he took. He was Gene Roddenberry’s first choice as Spock on Star Trek but didn’t want to play a pointy-eared Vulcan. He turned down Gene Hackman’s part in The Poseidon Adventure, because he didn’t want to shoot a movie about “an upside down boat.”

Conrad, on the other hand, got his most memorable roles after other actors turned them down. The 81-year-old was cast in Wild Wild West after another actor ditched the western at the last minute. Conrad was one of 16 actors who auditioned to step in and was pretty sure John Derek–once married to Linda Evans–had the role. Derek, for some reason, turned it down and Conrad got the part.

He says he owes his career to James Dean. Dean’s sudden death before the release of East of Eden left producers without a major star to promote the film. Conrad’s mom was in P.R., and talked the lad into getting his hair cut like Dean in order to pose for publicity stills and work background on newsreels.
He was also a last-minute replacement in Assignment: Vienna, an early ’70s action hour shot on location in Austria. When the original star quit, Conrad was only too happy to live it up in Europe for a year.
Conrad was also asked about his many Battle of the Network Stars appearances. The highly competitive actor was a team captain for the mid-’70s series, which featured Howard Cossell and many many series stars. Conrad challenged Welcome Back Kotter star Gabe Kaplan to a famous race, which the action star lost.
What he won from that, however, was a million bucks. An on-camera, “you-want-a-piece-of-me” gesture landed the Hollywood hothead a lucrative sponsorship deal with Eveready batteries. “Go ahead,” Conrad used to seethe, “knock this battery off my shoulder.” The full story, from Conrad:

I got into an argument with Telly Savalas, a legitimate argument. And I did this (makes a fist). I did that. And Bill Livingston, the president of Eveready, said, “Did you see that guy on TV? Did you see that guy that was going like that (making a fist) on national TV?” And the next thing I knew, they showed it six times during the football championship, and I went, “I dare you. I dare you to call it,” whatever. And thank goodness for “The Battle of the Network Stars.”

The actor remained confrontational years later when he attended the summer, 1985 press tour. Conrad was in Phoenix with his sons Christian and Shane promoting High Mountain Rangers. The actor came to the CBS executive session that tour and, in front of a room full of press, openly challenged CBS programming boss Bud Grant. Grant, who could have starred on The Sopranos, was somebody you didn’t screw with, and Conrad admits the stunt didn’t go over well with the boss. “He wasn’t happy about that. I got a call two days later. Hey, I just told you what I thought,” he told Grant. Mountain Rangers was quickly pulled “for some Dirty Dancing show featuring the nephew of the network president.” Conrad is still Mr. Angry.
The 81-year-old actor does a weekly digital radio show today, something he plugged continuously during the Pioneers session. He remains partially paralyzed on his left side, the result of a 2003 car accident. Conrad was convicted of drunk driving and the young driver he hit, head on, eventually died as a result of his injuries.

The Wild, Wild West star did not seek or get much sympathy. The other panelists seemed to ignore him, especially Nichols and Evans, who had to endure the brunt of his charm. “Being next to these beautiful women ain’t bad, works for me,” he said. Later on he pointlessly extolled the virtues of Viagra.
Nichols, 77, told a long story about meeting Dr. Martin Luther King, who introduced himself as her biggest fan. Who knew Dr. King was a Trekkie? Nichols was set to ditch Star Trek after one season when King turned her around, telling her she was a role model and an inspiration.
Connors, 84, who told his pal Landau to “stay perpendicular,” beat it out of the hotel directly after posing for the group shot. He was last seen sliding across the hood of a Pontiac Le Mans, leaping into the bench seat of a convertible and giving the tour one last squint in the rear view mirror.
PBS Pioneers of Television Linda Evans Nichelle Nichols Robert Conrad Mike Connors Martin LandauUncategorized 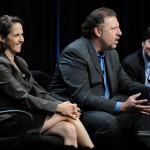 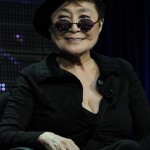 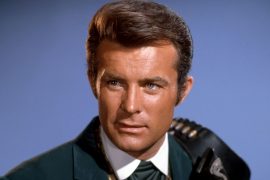