BEVERLY HILLS, Calif.–With the summer Television Critics Association press tour now officially over, which show emerges as the one to beat next fall?
Among the network offerings, its probably the one with the most buzz heading into the press sessions, Marvel’s Agents of S.H.I.E.L.D.
Critics are generally sent screeners of the fall shows to their homes and offices before departing for press tour. SHIELD (don’t make me re-type the full name every time), however, was withheld. For most critics in the room, Sunday’s screening in the ballroom of the Beverly Hilton was their first chance to see the pilot.
(A few critics caught the surprise screening a few weeks earlier at Comic-con.)
Reporters were asked to refrain from tweeting any plot points from the first episode. The general reaction in the room was positive, however. There seems to be consensus that SHIELD will open big, along with The Michael J. Fox Show and The Crazy Ones. The Blacklist is another network offering getting good advance buzz.

As always, some of the funniest and most entertaining press sessions were for shows critics weren’t so crazy about. Jeff Garlin (Curb Your Enthusiasm) had the room in stitches during the panel for The Goldbergs, an ABC comedy.
Surveying all the open laptops at these sessions, he said, “I want to say, it’s very unsettling to be up here and have half of you playing poker.”
Garlin brought his new digital Leica up on stage with him and was snapping pictures during and after the session. He had it with him later at the ABC party, where he told a few of us that, earlier in the session, it took him about two minutes to size up the room and know how far to go.
Reading the room really is an art at press tour.
As for SHIELD, not all the big buzz shows heading into the fall emerge as hits. Terra Nova, Studio 60 on the Sunset Strip…can’t miss is sometimes a curse, It’s like college football–you really don’t want to be ranked No. 1 heading into the season.
More seasoned critics can recall all the advance buzz 15 years ago about The Fugitive. The remake, which starred Tim Daly, had a slick pilot, but the series ran out of money and special effects fast and fizzled after a half season.
The big winner that year was a show nobody was talking about heading into the fall, a show that was literally a last-minute pick up for CBS: CSI.
For more on SHIELD and its press tour session, follow this link to a story I wrote Thursday on the series for The Canadian Press. 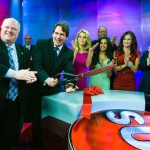 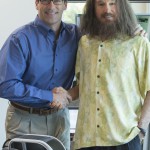