PASADENA, CA–That Ken Burns. He pays attention to detail.
Monday afternoon, he was back at press tour for the umpteenth time, this season promoting The Address. At 90 minutes, The Address is about four score and seven years shorter than many of Burns’  epic docu-films of the past. That’s because it is based on Abraham Lincoln’s famous Civil War-era speech at Gettysburg, which was made 150 years ago and took just two minutes to deliver. Burns calls it the most important speech any president has ever made.
Now the paying attention part. Told he had been mentioned “as much as Lena Dunham in these TCA sessions,” Burns shot back, “Does that mean I have to take off my clothes?”
Bam. A Lena Dunham joke from Ken Burns. That brings the Lena Dunham TCA reference tally to 10 sessions and counting.
Burns’ new film has an unusual, for him, framework. It centres around a group of mentally challenged students at The Greenwood School in Putney, Vt. Each year, the students are asked to memorize the Gettysburg Address.
Burns lives quite close to the school and one year was asked to judge the student efforts. He ended up making it an annual duty. “I just wept and said, ‘Well, somebody should do this. This is cinema verite, I do something else.’ And I kept saying this over the years and finally, was like, Shut up. Just do it.”
Burns has an even closer personal connection to the address. When his oldest daughter, Sarah, was 12, she recited it to him as a surprise Christmas present. Burns says it’s the greatest gift he’s ever received at Christmastime.
Burns is working on six different projects at the moment, including a docu-series on cancer, a finished work on Franklin Roosevelt and an exhaustive look at the Vietnam War. Work has also begin on projects saluting Jackie Robinson, country music and Ernest Hemingway.
The Address is scheduled to air April 15 on PBS, which means it will probably air on the Buffalo WNED affiliate (which is delaying the new season of Sherlock) many month later. 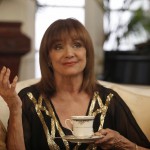 Valerie Harper: living one day at a time

This week’s podcast: will Ford do Kimmel?