I’ve been following the TV numbers racket for years in Canada but am left scratching my head over the past few days.

The one that really seems, if you’ll pardon the pun, inconceivable: the soft opening of Seed Monday night on City. According to the overnight estimates, it drew 344,000 viewers across Canada–about half what I would have predicted.
The network gave the Halifax-based comedy plenty of on-air promotion. The timeslot seemed like a perfect fit, hammocked between two of City’s top import comedies, How I Met Your Mother (which scored 890,000 viewers with a Canadian-themed episode) and this year’s biggest U.S. comedy hit, 2 Broke Girls (1,039,000).
More puzzling for City and the producers, when you drill down the numbers, is the apparent lack of viewers in the targeted demos. Seed‘s A18-34 and A18-49 numbers were even further behind percentage-wise the take of the other two comedies.
So where did those younger viewers go? The big draws at 8:30 p.m. ET Monday night were Bones on Global (1,605,000 2+ estimated viewers), a Big Bang Theory repeat on CTV (1,354,000) and a Leafs game on Sportsnet Ontario (784,000). A repeat of a repeat of Dragon’s Den drew 490,000 on CBC.
A busy night but they all are. So what happened?
City took a step which is becoming more and more commonplace in the U.S. and that is to pre-release Seed for a few days on-line in streaming video. Did this draw down the Monday premiere number?
The truth is, there are so many outside factors at play now that “opening big” almost takes a Super Bowl-style promotional push. CTV’s efforts to guarantee a record-breaking opening audience for their new Vancouver-based drama Motive were undoubtedly blunted by the 35-minute blackout in New Orleans. Motive‘s late, 10:59 p.m. start probably cost CTV at least half a million viewers as it wound up with an overnight average of 1,229,000. Pretty damn robust for that late hour (it topped Global’s simulcast of CBS’s Bowl-hyped Elementary, which drew 548,000 in Canada), but a big drop  from the massive, 6.5+ million CTV football audience.
CTV repeated the Motive premiere Monday night on CTV Two and it went almost unnoticed. Only 106,000 sampled it there.
Two years ago that overnight would have been a much higher number. What else was going on Monday night?
One wild card is Netflix and the weekend dump of 13 episodes of their new original drama House of Cards.Anyone binging on this feast–and they’d likely be in the A18-49 demo–probably still had a few episodes left over by Monday night.
Are Canadian audiences slow to embrace a show that is–wait for it–Canadian? Let’s deal with that right away. In the past year, from Bomb Girls to Saving Hope to Arctic Air, there have been plenty of homegrown success stories to wave the flag about.
Comedy, however, is different. Even a monster hit like The Big Bang Theory took time to build. CBC just moved Mr. d out of the Monday mix in hopes that Wednesdays might be a better fix.
The good news story for Canadian television on Monday nights continues to be CBC’s pickup of Murdoch Mysteries. The historical police drama has exploded in its sixth season, pulling 1,051,000 this week in the overnights. Murdoch occasionally topped half-a-million but averaged maybe a third of the new CBC numbers over five years on City. This is shaping up to be Canadian television’s version of the Kessell trade.
Seed could still have the last laugh. Episode Two, in my opinion, is funnier than Episode One. When the total numbers come in, and Live+7 viewers are added, opening night might look a lot better.

City programming executives, meanwhile can take solice in some musings Fox chairman Kevin Reilly shared with reporters last month at the winter TCA gathering in Pasadena. Reilly and his colleagues at the American networks have been coping with a landscape that seems to be shifting by the week. He acknowledged the impact of binge viewing: “If I bumped into one more person that was doing a Breaking Bad marathon in the middle of our fall launch…” he said. Reilly continued:

There was nothing more frustrating to me. I love Breaking Bad. It’s a great show to marathon. We’re trying to get people’s attention and I literally would bump into people, particularly people who’d just discovered it. “You know, that Breaking Bad is a great show.” And that is very good for the overall television business and the environment. It’s very robust. But it makes our ability to marshal these different audiences and measure them difficult.

Reilly, who once programmed NBC and has been in the business 20 years, says the broadcast network job has never been more challenging:

There are a lot of different shows on television and online that can amass these smaller, different constituencies. Our job is attracting big, giant, broad access hits, and I believe in it as much as the day I got in the business. I know we’re still a hit driven business — at FOX, we’re struggling right now because we didn’t put on a big hit. When we do, this picture will look very different overnight. But our ability to market to those audiences and measure those audiences has changed drastically. 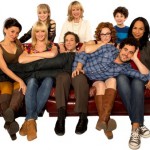