A couple of shockers as the Fall Season unfolds. The X Factor, the new talent search series featuring Simon Cowell and Paula Abdul, is no Death Star. The Fox reality show was expected to duplicate its success in The U.K. and dominate ratings in America but, based on opening night, it fell short of X-pectations.
CTV drew 2,190,000 overnight, estimated viewers with the series Wednesday night, putting it second to Global’s resilient Survivor Pacific (2,281,000) in the timeslot. Worse, it wasn’t even close among 25-54-year olds, with Survivor holding a 1,186,000 to 879,000 edge. Tonight it bounces over to CTV Two.
In the U.S., The X Factor opened to 12.5 million total viewers and 5.6 million young adults in the overnights, less than half what American Idol opened to last January.
Have these endless star search shows finally started to wear out their welcome? As Jimmy Kimmel sarcastically remarked Wednesday night, “I watched The X Factor and I think it’s high time that America had its own televised singing competition. We needed it.”
The X Factor wasn’t even the highest-rated show on CTV Wednesday night. CSI–with Ted Danson taking over from Laurence Fishburne–roared back with 2,593,000 viewers (although even it fell short of Survivors younger demo tally).
The other shocker was the painfully low numbers for CBC’s terrific new comedy Michael Tuesday & Thursdays: 199,000. How fast can they move Tuesdays and Thursdays to Fridays?! The Debaters also got crushed by the competition, pulling 187,000. Dragon’s Den did a respectable 1,121,000 against the full fury of Survivor/X.
City Emmy-winner Modern Family came back strong at 865,000 at 9 and an even million at 9:30. The new drama Revenge, starring Ont.-native Emily VanCamp, opened at 523,000. Even Harry’s Law had a decent start at 9 on Global, drawing 865,000. 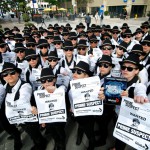 Tonight: Hats off to Maria Bello on Prime Suspect 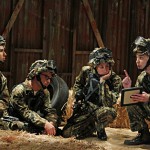