According to showrunner and writer Terry Winter, Vinyl bad boy Richie Finestra is “a pretty accurate amalgam of a lot of different record executives.”

Finistra is the character at the centre of the set-in-the-’70s drama. A lot happens to Finestra in the first two hours–he even has a building fall on him. The series premieres Feb. 14 on HBO and HBO Canada.

Played by Bobby Cannavale, Finestra is also the unreliable narrator of the series. We see a lot of crazy stuff through his eyes, which are generally bloodshot after all the stuff that goes up through the character’s nose.

“I snorted Coke for the first time on this show and it was fake coke,” says Ray Romano, who plays Finestra’s sleazeball of a music business promotions manager. The gunk the actor’s had to “snort” was really a mixture made up mostly of lactose powder. Cannavale, said Romano, “had to snort almost every day. He was really working hard.”

Read more about Bobby Cannavale and Vinyl here at this story I wrote for The Toronto Star. 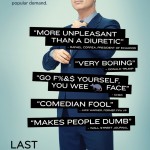 John Oliver is back with more Last Week Tonight 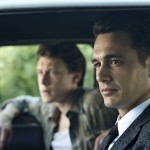