Finally a little good news for the Vancouver TV biz–Reaper has been renewed.
The CW announced their fall 2008 schedule at their upfront today in New York, and the Vancouver-based comedy, which features Ray Wise as the Devil as well as Ontario-native Tyler Labine, will return as a mid-season replacement. Several other Vancouver crews are out of work following cancellations of Aliens In America, Men In Trees and Bionic Woman. Each U.S. series typically employs between 100 and 200 Canadians.
The CW had such a horrible season in 2007-08, a U.S. station chain is blaming the fledgling network for forcing it into bankruptcy protection.
One new project already has some borrowed buzz: a remake of Beverly Hills, 90210. The new series, simply called 90210, will feature original series star Jennie Garth as a recurring character. Lori Loughlin (Summerland) and Jessica Walter (Arrested Development) are also on board. There was no mention of Tori Spelling on today’s CW release.
And–OMFG!!–The CW has a new series called Surviving The Filthy Rich, which sounds like Gossip Girls in Palm Beach. Gossip Girls is back despite horrible national numbers. CW says it is a hit with dozens of teenage girls 😉 Like a lot of other shows launched last fall only to be cut short due to the writers strike, it is getting a second chance.
A new reality series, Stylista, turns the Devil Wears Prada into a weekly TV contest, with contestants vying for a job at a high end fashion agency.
WB holdovers Smallville and Supernatural will also be back, which is also good news for Vancouver crews. One Tree Hill, America’s Next Top Model, The Game and Everybody Hates Chris have also clung to the CW schedule; sadly, Aliens In America did not. 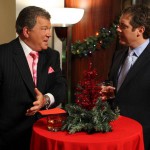 Nicotine Jones and the Temple of Walgreens