As pointed out on TV Worth Watching and a few other places, it was 20 years ago today that Johnny Carson took his final bow on The Tonight Show. Twenty years already?! You are correct, sir.

That excellent PBS American Masters‘ retrospective of Carson’s career, which premiered earlier this month, is still up at PBS.com. Watch the entire two hour Johnny Carson: The King of Late Night here.
I asked David Steinberg, who was at the most recent TCA press tour in Pasadena in January to promote his Inside Comedy Showtime series –for a Carson story. Steinberg, the Winnipeg-born comedian who, among other things, helped torpedo The Smothers Brothers, talked about how he hated the “pre-interview,” the first step all late night talk shows use to line up stories that will be told by their guests on their shows.
“When I started out with in ’68,” he said, “I wanted to improvise.” Steinberg felt his Second City improv training was all he needed to prepare for Tonight or any other live-to-tape television.
said to me, ‘This is a formula, and it’s not for people like you, but it’s for dull people. When they’re not working, and they don’t know whether they’re funny or not, I have to know what the out line is I have to know where they’re going maybe to help the story and all of that.””
Steinberg said it took him four years as a guest to get Carson to trust him enough to ditch the pre-interview. He was finally allowed to just provide bullet points–“Lakers, daughters, courtship” he said by way of examples. He told Carson “You can interrupt me whenever you want and I will find an out and you will know when I’m finished.”
Steinberg says only a select few got this carte blanche guest segment treatment from Carson, singling out Bob Newhart as another guest nimble enough to just vamp with Johnny. Don Rickles, you’d have to guess, was also on that list.
What about the way Craig Ferguson just tears up the questions on the blue cards before each guest segment, another critic asked. “Not sure about that,” said Steinberg. “Please don’t get me into a controversy.”
David SteinbergJohnny CarsonThe Tonight ShowUncategorized 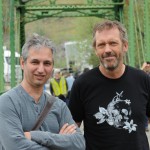 House finale: it’s never too late to enjoy yourself 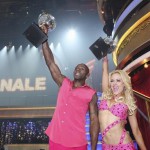 Driver a worthy Dancing with the Stars champ