I tried to interview Enrico Colantoni a few months ago on the set of his new series Remedy but he was just too damn busy. The made-in-Toronto medical drama premieres tonight at 9 p.m. ET on Global.
The man stopped by to say hi when he spotted me in producer Bernie Zukerman’s office on the east-side Toronto set, then dashed away. Colantoni wasn’t star trippin’. The former Flashpoint and Veronica Mars star really did have his hands full, directing his very first TV episode.
It was part of the deal used to lure Colantoni, 51, onto another series so soon after Flashpoint shot its last round.
“For me, it was a lesson in being taken care of,” he says, with typical modesty, of the opportunity to direct. He jokes about how the camera operators were still able to function given his “limited vocabulary.”
He says he decided early on to work to his strengths and “be there for the actors” in the scenes he was directing. He notes how Remedy creator and showrunner Greg Spottiswood is a former actor. “I always feel good when Greg’s on the set,” he says. “He brings an empathy for what we go through. He knows when and how to give notes.”
A lot of series leads seem to be testing themselves as directors these days, including the likes of Bryan Cranston and Jon Hamm. Jason Priestley directs as often as he acts. Even relatively young Gregory Smith got behind the camera for an episode of Rookie Blue.
Still, it is unusual for producers to invite an actor to direct his very first episode in the first season of a new show–an indication of just how much trust and esteem the folks behind Remedy–including executive producers Greg Spottiswood and Bernie Zukerman–place in Colantoni.
Then again, who wouldn’t trust this guy. He delivers every time as an actor and he’s about the nicest guy in the business you’d ever want to meet.
That’s just not my opinion. It is what you hear from anybody you ask who has ever worked with him.
The Toronto native plays Dr. Allan Griffin, chief of medical staff at fictional Broadview Hospital. Dillon Casey (Nikita) plays his son Griffin, who dropped out of medical school and slinks back in Monday’s pilot as an orderly at the hospital in the “downstairs” part of the Downton Abbey, MD, storyline. Genelle Williams, Sara Canning, Sarah Allen, Patrick McKenna, Catherine Disher and Martha Burns round out a terrific ensemble.
Colantoni says he’s happy it’s “not just me and another guy storming the castle.” He raves about the ensemble, singling Casey and McKenna out for special praise.
“You think he’s going to be the funny guy,” he says of McKenna, still known by many as nephew Harold from Red Green, “and all of a sudden he turns it on a dime and give you the pathos of the man. He’s remarkable, I love watching him.”
Read Colantoni’s very complimentary take on co-star Dillon Casey here in this article I wrote for Sunday’s Toronto Star.
On Remedy, Colantoni says he’s happy to be the “wily veteran who gets two or three days off every episode.” It was the kind of a work load he enjoyed on Veronica Mars and thought he was getting into on Flashpoint. “I know the demands of TV,” says Colantoni, who also starred for five seasons on Just Shoot Me, “and I know what working every day for 12 hours a day does to your psyche.”
So he’s OK with, as he puts it, “eye candy up front, bald guy in the back.
“Give me the one or two scenes that are really meaty and I’m a happy guy.” 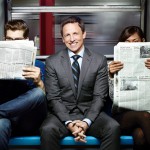