CBC picked a Friday to quietly announce the shows it was picking up for the 2014-15 season. It was already known that Arctic Air, Cracked, George Stroumboulopoulos Tonight and The Ron James Show would not be back. Hockey Night in Canada will be back on Saturdays but new TV hockey boss Rogers will keep all the ad revenue. If that didn’t already hurt, CBC’s in the second year of a three year chop to its annual appropriation.
Low-rated daytimers Best Recipes Ever and In the Kitchen with Stefano Faita are also off the menu.
New shows announced include Shitt’s Creek with SCTV legends Eugene Levy and Catherine O’Hara, Strange Empire–about women stranded in an 1860s western town–plus a drama from Laurie Finstad (Durham County) are also new to CBC. Reality shows Canada’s Smartest Person and Of All Places (focusing on small town Canada) will also join the schedule.
Bubble shows making the cut were Gerry  Dee’s third year comedy Mr. d and the daytime talker Steven and Chris. Republic of Doyle will be back for a sixth season, and Murdoch Mysteries an eighth (third on CBC). Heartland, one of the networks most consistent Sunday hits, is also back for an eighth season. Long running comedies Rick Mercer Report (renewed for three seasons), 22 Minutes and Just For Laughs are also back.
Dragon’s Den will have to grouch on without resident meanie Kevin O’Leary, who is being replaced by Luigi the Lovebird. 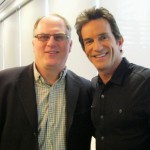