Fire up the Tiki torch and pass the Doritos. My old pal Jeff Probst was in Toronto this week to promote Season 28 of Survivor.
Probst is not just the host but also an executive producer on the CBS reality series, which began way back in 2000.
He was happy to hear Survivor is trouncing American Idol these days in Canada. The two go head-to-head on Wednesdays. This Wednesday, April 2, Survivor drew an overnight, estimated 1,738,000 to Global. Idol‘s Top 8 performance episode did just 616,000 on CTV2.
Once the “Death Star” feared by all other programmers, Idol has slid a ton this season, eclipsed by NBC’s The Voice in the talent show race and damaged perhaps by the utter failure of former Idol judge Simon Cowell’s other star search import, the X Factor.
The Idol ratings fall off has been dramatic. I’ve been recapping it every week for TheStar.ca (see Wednesday’s recap here and Thursday’s here) and, in my opinion, the series and especially the current judging lineup of Jennifer Lopez, Harry Connick, Jr., and Keith Urban, are as entertaining, if not better than ever.

The talent, however, is not. Not big stars have emerged from Idol the last few editions (or The Voice for that matter). After 13 editions, the talent pool for Idol may be a bit fished out. This is not a factor for Survivor, where there is clearly a bottomless supply of heroes and villains across America to choose from.
Survivor‘s numbers have slid, too, but, as Probst pointed out, so has everything on network TV. The fact it is one of those shows people tend to watch “live” gives it more value among advertisers.

Despite what Probst felt was “three amazing twists in about 120 seconds in this week’s tribal council,” this week’s Canadian overnights were down from the series average so far this season, which most weeks has been over the two million mark. Back at its peak, the series used to haul in over three million Canadian viewers a week.
Still, two million viewers a week places it among Canada’s Top 10. Not bad 28 editions in, with two more already  ordered.
Probst says the feedback he’s been getting from fans is that the past four editions of Survivor have revived interest in the series. Last year’s “Blood vs. Water” match went so well it will be revisited next season, and the current “Brawn vs. Brains vs. Beauty” has also been well received.
He feels tweaking the game without changing the essential format is the secret of Survivor’s incredible longevity.
I was blown away when Probst told me how many people are involved in cranking out Survivor each week: around 400, he says. Setting up that kind of infrastructure in the South Philippines islands is a monster task, which is one reason this series does not jump all over the globe.
Besides what he brings to the series on-screen, Probst is tremendous at promoting the series. He’s always accessible and friendly with reporters and will spin any question back at you with an angle for any market.
Case in point: I asked him how long he thought Toronto mayor Rob Ford would last on Survivor. You can read his surprisingly strategic take on that here in this feature I wrote for The Canadian Press.

How Letterman knew it was time to go 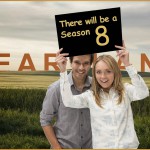