Looks like I wasn’t the only one to get busted on the upcoming second season of 19-2. My old pal Serge Houde (50/50, The Kennedys) guests as Leon, a homeless dude with Tourette’s who has a nasty habit of skinning squirrels until he gets apprehended by Nick and Ben (Adrian Holmes and Jared Keeso).

The versatile Houde is an ex-ad man and knows the best way to self promote is to send a photo to a fellow 19-2 arrestee. The Montreal-based police series is currently in production and will return to Bravo early in the new year. 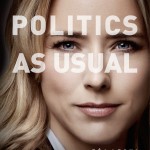